Corresponding author:
Edris Queiroz Lopes, University of São Paulo, Faculty of Veterinary Medicine and Animal Science – FMVZ / USP, São
Paulo, Brazil.
E-mail: edris@usp.br
Abstract— Chelonia mydas, popularly known as the green turtle, is widely distributed in tropical seas and uses
as its feeding area the coastal region of Peruíbe, located on the southern coast of São Paulo State. It has a solid
cranial formation, without temporal openings and formed by the junction of several small bones, among them the
hyoid bones that have the function of supporting the tongue. In a study conducted with 10 individuals of the same
species and with similar sizes, the objective was to verify the presence of a differentiated bone structure that has
not been described in any study until the present moment and to verify if it was not only anatomical variation
generated by any anomaly. in the evaluated animals. The techniques used for verification were computed
tomography (with window for bone parts: center – WL 300 and width – WW 1,500) and histological analysis. For
histology, the hyoid bone structure was removed from the skull separation and disarticulation and tongue
extraction. With the separation of the bones, cuts of approximately 0.5 cm in length were made and fixed in 10%
paraformaldehyde, with subsequent application of the fixation procedure, for observation with scanning electron
microscopy. The structure analyzed was identified in 6 individuals. This proves that it is part of the formation of
the hyoid bone, so it is necessary to name this structure and carry out in-depth studies to know its importance and
to verify if it is a modification that is affecting the species or if it is a genetic variation that affected population
studied.
Keywords— keratobranchial process II; morphology; scanning electron microscopy; tomography. 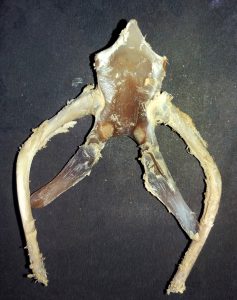