Brazilian scientist finds two-headed shark on the South Coast of São Paulo – First case of Siamese twins in the species in the world!

Brazilian scientist finds two-headed shark on the South Coast of São Paulo – First case of Siamese twins in the species in the world!
The Scientist, marine biologist and Veterinary Anatomist professor Dr. Edris Queiroz and the researcher Luana Felix, from IBIMM – Institute of Marine Biology and Environment of Peruíbe in partnership with Prof. Dr. Alberto Amorim and Dr. Eduardo Malavasi from the Fisheries Institute of Santos, have just made an incredible discovery about a species of shark (Squalus acanthias), also known as (catfish or houndfish) it has 02 poisonous spines on its dorsal fins, but the first is that it has “02 heads” and can be considered the first case of Siamese twins in a shark in the world!
The encounter of sharks with 02 heads is a rare event in the world, but it can happen, because some records have already been made and documented, but this is the first of a Siamese twin found in nature and described in the literature. The fact that they have 02 heads leads the animal to death very quickly, making it very difficult to have reports about this type of malformation in this group of fish. The causes of why this happens are still unknown, but it may be related to ocean pollution, genetic changes, problems in the uterus and other causes.
For the biologist, congenital anomalies can be modifications or malformations found in the embryonic development phase of the animal, and can disguise structures or system roles. Congenital disorders can occur from small changes, slight changes, serious changes and also genetic absurdities. There are no definite apparent reasons, and these alterations may be caused by environmental and genetic factors, or their meetings, and because it is a very rare event, its cause is difficult to analyze.
Scientist Edris Queiroz has been monitoring these animals on the São Paulo coast in the city of Peruíbe for more than 06 years, within the conservation units and on the region’s fishing stalls and in partnership with fishermen. The animal was found by a fishing vessel, between the cities of Itanhaém and Peruíbe, south coast of São Paulo and donated to IBIMM, Institute of Marine Biology that is in the city of Peruíbe.
More than 100 dead animals have already been found in their research, which is on the Peruíbe coast, very important for species of sharks that live there, as it is still a very preserved area and the females use them to give light to the young, which find large numbers of prey to feed.
The Scientist reports that from the news, it may be possible to draw more attention to the serious problems that have been observed in marine environments and that the appearance of anomalies can show that something very worrying is underway and, we must be concerned quickly to know the why this!
Regarding the finding, the specimen under study does not fit the terms previously mentioned in the world literature. From the moment in which the completely independent vertebral columns were recognized in the specimen, it presented double internal organs and fusion of the intestine (colon) with double size in the pelvic region and after analysis of the external and internal anatomy of Squalus acanthias, it was shown that the best definition would be that of Siamese Gemini.
The discovery will help other researchers and scientists to also understand the changes in these animals and seek measures to help preserve and conserve species. 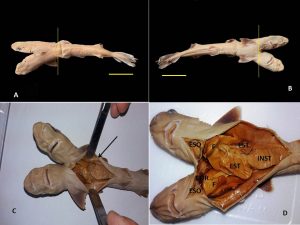